Will Ferrell's celebration of all the fun elements of Eurovision is now on Netflix. | Icelandair
Pingdom Check
06/26/2020 | 4:59 PM

It was back in 1998 that Will Ferrell discovered Eurovision. He was in Sweden with his future Swedish wife, Viveca Paulin, when she suggested they watch Eurovision. For the uninitiated, the Eurovision Song Contest is an annual international song competition held by the European Broadcasting Union since 1956. This year’s edition, which was supposed to take place in the Netherlands in May, had to be canceled due to the COVID-19 pandemic. With contestants representing almost every European country—and some other countries, too—Eurovision is a three-day musical fiesta with lots of glitz and glamour, catchy pop tunes and all-round silliness.


The American comedian had never heard of it before and was amazed by what he saw. He was transfixed as to what was going on. His comedy brain soon turned on and he thought: “This is great stuff for a movie!” But it took him more than 15 years to sit down with fellow writer Andrew Steele to finally write a script. Eurovision Song Contest: The Story of Fire Saga was released on Netflix on June 26. Ferrell and Rachel McAdams play the Icelandic contestants in Eurovision. Parts of the film were shot in Iceland, specifically the seafaring town of Húsavík in North Iceland from where Lars and Sigrit, the main characters, hail.

Tina Jøhnk Christensen spoke to Will Ferrell about this experience for Icelandair. 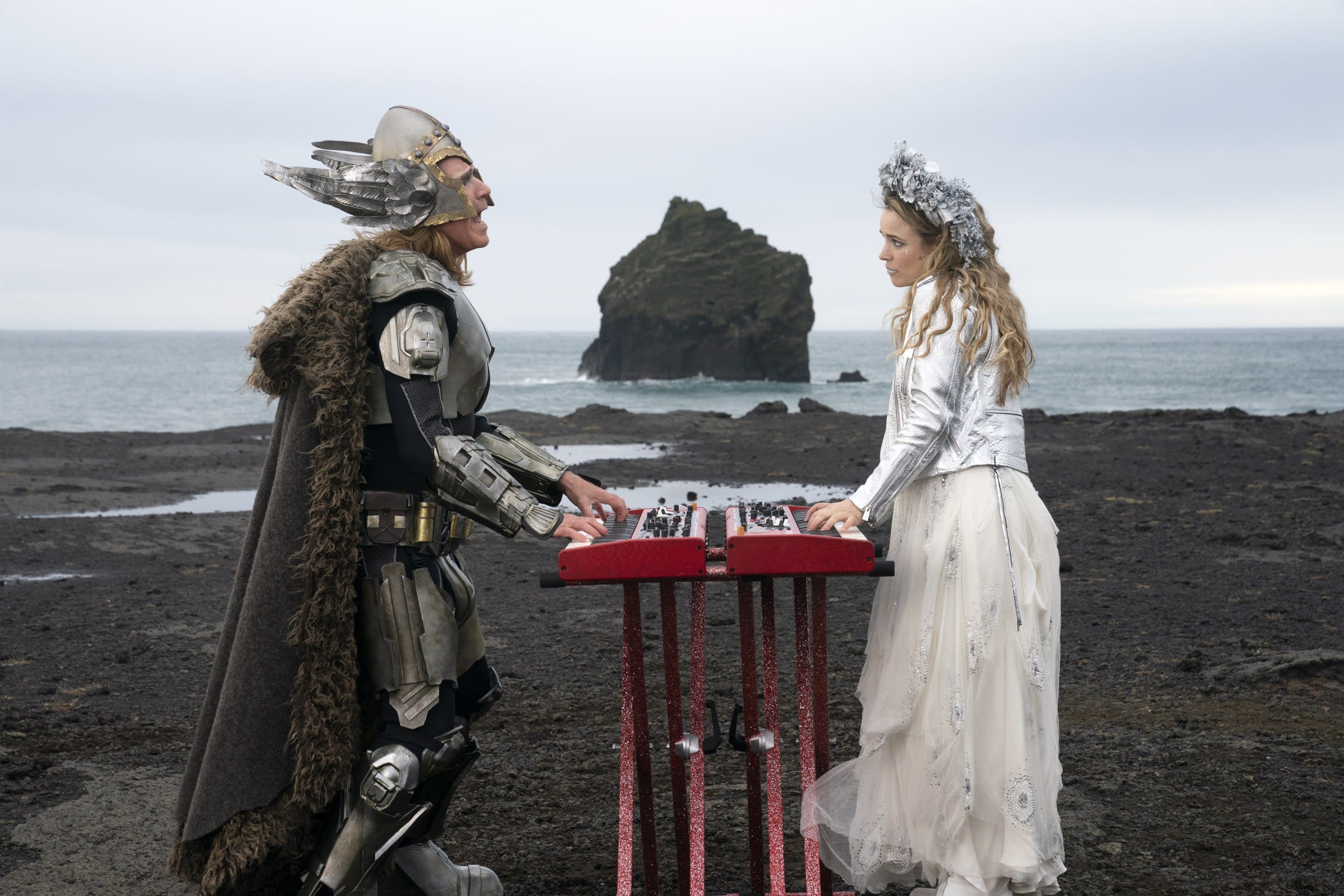 
Why did you decide that you had to be from Iceland but not Sweden, considering that your wife is Swedish?

We thought about being competitors from Sweden but unfortunately for the movie, Sweden has had too good a track record. They have won too many times. And we just really liked the idea of a smallish country that is coming from the outside, not being typically one of the favorites, and we liked the idea of keeping it Scandinavian because that was a fun accent for me to play around with. And it just seemed like, outside of Iceland’s remarkable football team, you don’t hear so much about Iceland in a way. Even though—I take that back—now it’s become a huge tourist destination and rightly so, it’s such a beautiful country. But it felt like the perfect backdrop to be from this small town in Iceland. And also, it was interesting to talk about what if a country of 300,000 people had won the contest, then you have to host it, and that becomes a subplot that we used in the movie as kind of a little jeopardy plot that made it interesting as well. So it was based on all of those factors.

Can you broadly tell us what the film is about?

Rachel McAdams and I play Lars and Sigrit. We are from Iceland and we have the band called Fire Saga. It’s kind of a lovable loser story. We kind of get into the competition on a technicality and we are in way above our heads. And the broader themes are kind of art versus commerce, and that winning isn’t everything, and that you really should be true to yourself as an artist. It takes place in the insane world of Eurovision.

It was great. Shooting on those lava fields was something I will never forget. That was where we shot the “Volcano Man” sequence and that was our last day of filming. And even though it was freezing cold, what an amazing environment it was to shoot in. Here we were, ostensibly shooting a really silly music video in the middle of nowhere. And it was just one of the cooler days of filmmaking I had ever done. But the people couldn’t be better, so really is a very film-friendly place.

Why did you choose Húsavík?

Húsavík was just chosen by Andrew, whom I wrote the script with. He just found it on the map and it was our director David Dobkin who kept asking Netflix: “Can we please literally go and shoot Húsavík?” They said: “Sure, why not?” And it was great to actually be there and to not only shoot there, but also in the lava fields outside of Reykjavík. It adds so much texture to the movie that we get to show off how beautiful the setting is in Iceland. Not to mention that Reykjavík has an amazing public park on the top of a hill and it overlooks the ocean. It’s kind of amazing. 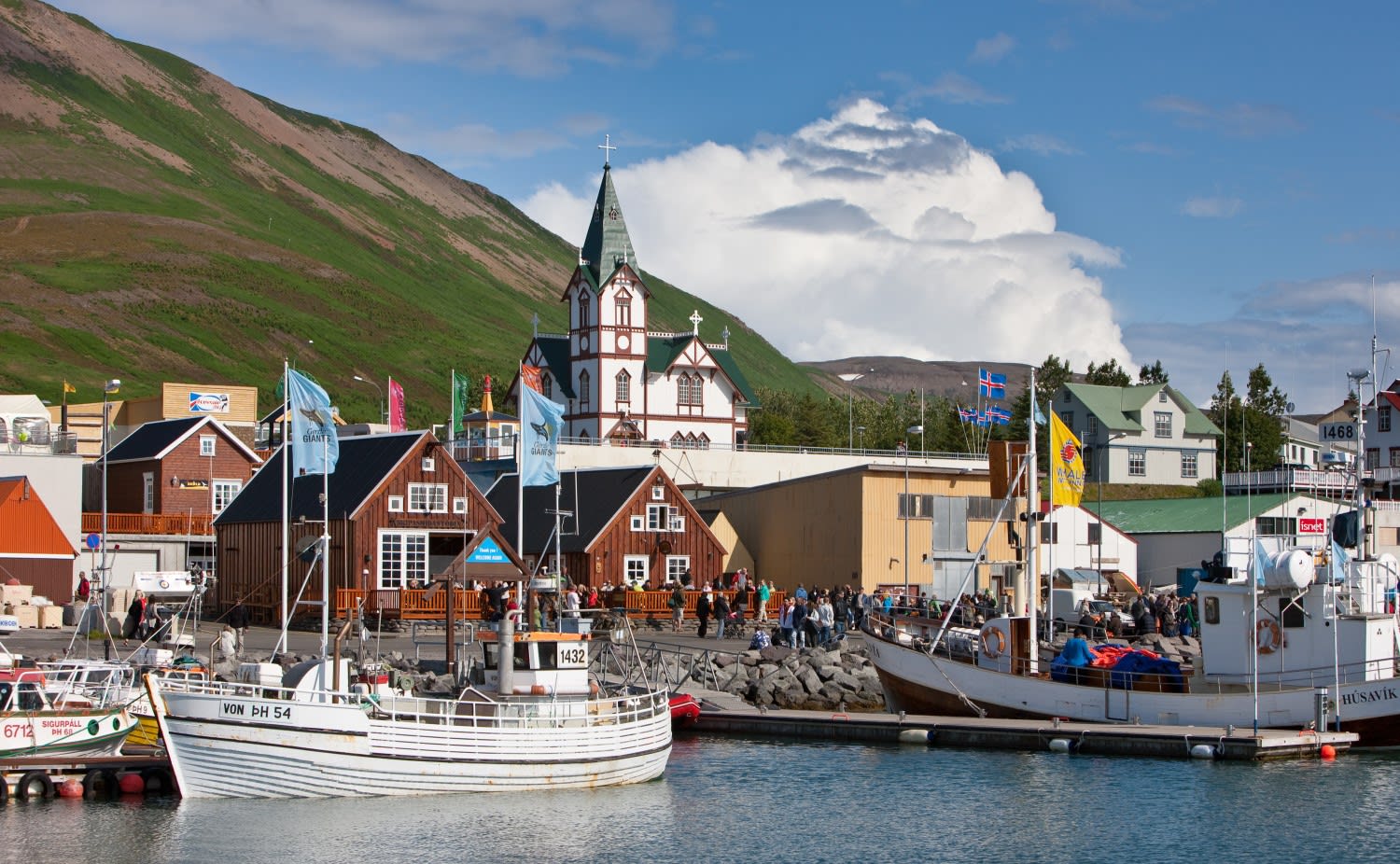 How long were you in Iceland? What was your impression?

It’s interesting to me. I describe it as a cold version of the Kona Coast on the Big Island of Hawaii. It's is also very bare and volcanic. It has a lot of the same geography. We were only there for four days and we were working a lot but it was fun to stay in a small city and get to see the people and work with the Icelandic crew. You really cannot replicate that kind of scenery. It makes me want to go back and explore the whole country more. I am impressed that they have such massive tourism—something like two to three million people a year. There’s a lot to see.

Did you learn any Icelandic?

We sing mostly in English, because unfortunately most of the Eurovision acts now sing in English. But then there’s a twist, so maybe we do sing in Icelandic, OK?

Pierce Brosnan plays your father. What was it like having someone like him, who played James Bond, play an Icelandic fisherman?

I mean it’s pretty nice to have James Bond as your father. And it’s also so great when you are writing the script and you literally write the actor in that you want to play the part, and he actually wants to do it. So we were having fun with writing Lars’ father as the most handsome man in all of Iceland. And we thought, like Pierce Brosnan, for instance. And to his credit, he thought it was funny and weird and different enough to want to do it. And he is just the ultimate gentleman, the perfect dinner party guest, he can kind of talk about any subject. And no matter how silly you try to make him look he still looks cool. I mean we were shooting that scene on the fishing boat where he gives me this triumphant speech about being a Viking and pursuing your dream and we were filming that day in 5-foot swells and the entire crew was getting sick. But in between takes there’s Pierce with his aviator sunglasses taking selfies. Just having the best time. And yeah, he truly is James Bond, he does not ruffle, ever. But my dad was not in the least bit jealous, he was just like: “Ah, please can I meet him someday?” So I have to make that happen … I have to make that happen! 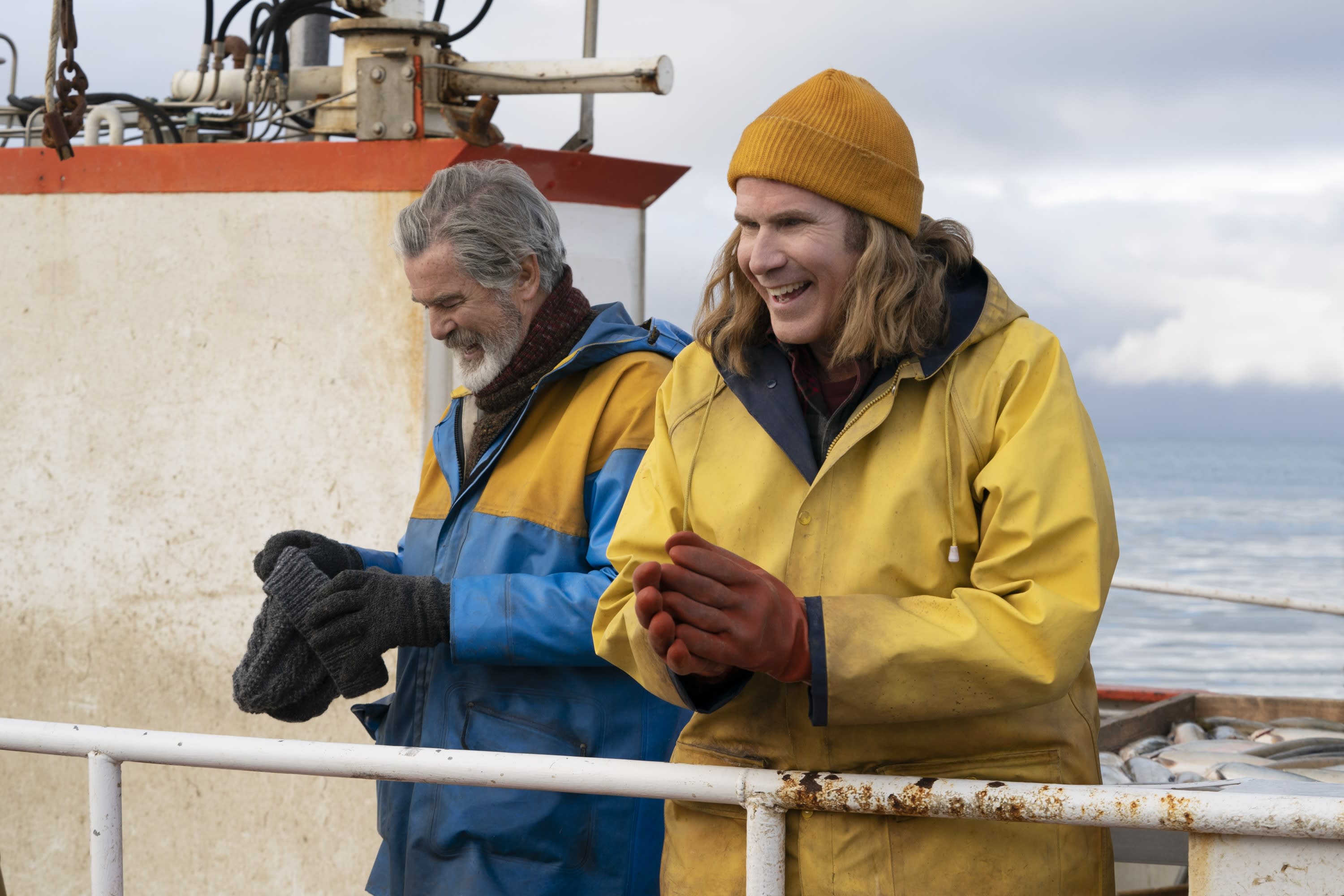 This year the Icelandic group, Daði & Gagnamagnið, was actually the frontrunner but unfortunately Eurovision couldn’t be held in Rotterdam as planned. Were you sad that this year’s Eurovision had to be cancelled?

Yes, obviously very sad that it wasn’t able to take place this year. I was really looking forward to having this movie come out right on the heels of the contest. We were also going to fly over there and obviously do press in conjunction with the show and actually have a premiere there, so it was really going to be fun to share this with the Eurovision crowd. But that having been said, at least this will hopefully be a nice substitute for people who are missing this year’s Eurovision. And then, yeah, it’s insanely ironic that this year, the Icelandic act was one of the favorites, it was just so funny to see that. I also noticed [Daði and I] had very similar hairstyles. But it was really flattering that they did a cover of “Volcano Man” which is on YouTube and it’s very cool. So hopefully they have a chance for next year, fingers crossed.

You were part of Iceland’s substitute Eurovision party from afar, revealing which country would have gotten the highest score—12 points—from Iceland. Was it an honor?

Oh, yes. I was very flattered that they wanted me to be part of the Icelandic presentation and it was very surreal to tape it on my phone and send it in. 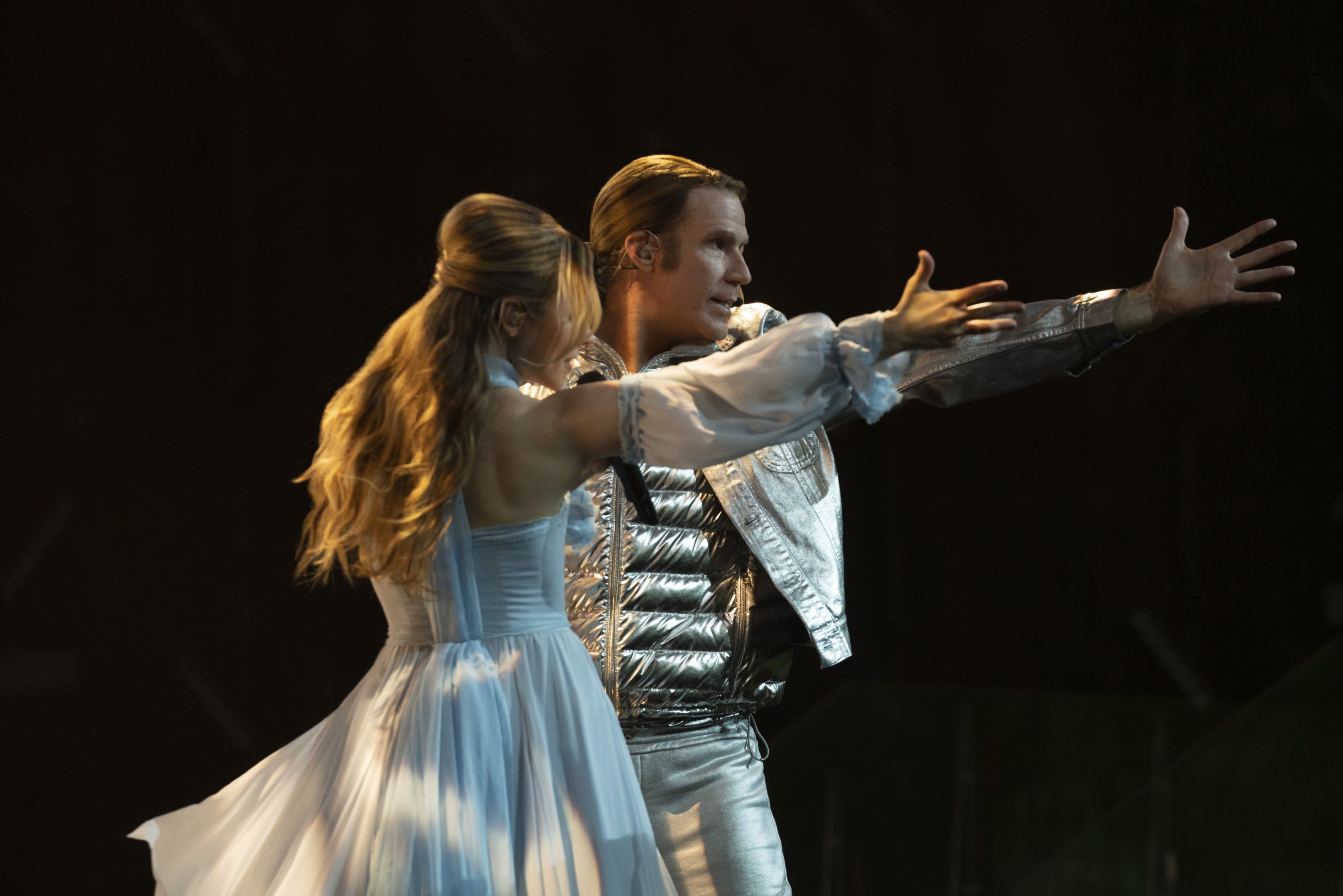 Icelandair connects more than 40 destinations on both sides of the Atlantic from our hub in Iceland. We also fly domestically within Iceland, including to Akureyri in North Iceland.